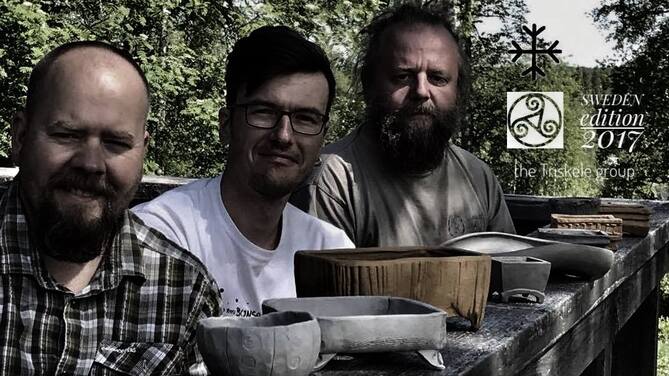 Once every year Tom Benda, Andrew Pearson and Thor Holvila meet up to make an edition of just a few pots together which will be named and stamped after the country they choose to work in.

In 2017 it was hosted by Thor in Sweden and the collection was named after the nordic rune Skräckhjälmen that symbolises the highest protection of all runes. 'Waterfalls' were an inspiration for this edition.

The body of each piece was created by one of the three potters, but then all were glazed by the host. This edition of totally unique and collectible pots are all stamped with each potters chop, the Triskele stamp and the rune Skräckhjälmen.
The results are outstanding...
Pot 1. Made by Andy Pearson - Waterfall
The first piece made by Andrew, was very much inspired by the cascading waterfalls of the area. Here, Andrew's form, together with Thor's glazing, perfectly capture this emotive force of nature.
​
...'this trip with my two good friends was such a brilliant time and I was out of my comfort zone on more than one occasion. Being away from all my usual tools like pottery wheel and slab roller meant that I had to make pots not in my usual way. This pot was one of those ways as this pot was carved from one single block of clay, something that I have never done before but very much enjoyed the process. Working with Thor and Tom opened me up to learning new techniques which perhaps I would never have normally chosen resulting in a unique set of pots from three clay mad brothers'
Pot 2. Made by Thor Holvila - Källa
...'When we sat down and asked ourselves where to start we came up with the idea to have a waterfall as a theme. This was one of the pots that sprung out of this idea'.
​
Källa combines Thor's earthen clay pinch pot and fish tail feet, with a wonderful depiction in glaze of ice filled water of the Swedish falls.
Pot 3. Made by Thor Holvila - Temple
...' After a few days we journeyed up into the mountains and the log cabin. The inspiration for this pot with its primitive carvings is inspired by the old buildings standing on the slopes of the Älvdalen valley'.

​'Temple' also looks like an old wooden box found by the creator in South East Asia. This box was intended for use as a 'Beetle nut' container (a popular snack of the area), yet it captures the essence of an old Chinese incense burner used in cemeteries and temples.
Pot 4. Made by Tom Benda - Purple Bridge
Connecting Tom to Thor for all time is the stunning 'Purple Bridge' - Superb form with use of 'drainage hole feet' that prop up the bridge allowing the waters to pass beneath. Dressed in Thor's sumptuous velvet glaze.
​
... 'This time I began with the idea of a bridge pot, or let's say "hill forest" pot, although it's a shohin or kifu size for that forest.
While working on the body, being focused and relaxed in the same time, a possibility of making the whole thing just from the single starting piece of clay slab whispered in to my ears 😀
I love the glaze Thor applied on this prototype pot. I'm looking forward to seeing this elegant but cheeky pot in use, in near future, I hope...'
Pot 5. Made by Andrew Pearson - Skräckhjälmen
The cascading waterfall design compliments the cascading form of the pot to one front, whilst the Rune protects the waterfall and pot on the other more formal front. This front also displays  proudly the Stone Monkey and Triskele stamps.
​
... 'This was the first pot I made on my pilgrimage to Sweden. I was at a loss of what to make and with only a handful of tools I brought with me I set to work. I tend to make a lot of slab built and thrown pots, so for the first one I decided to slab build and stick to what I knew. Whilst we were round the table we discussed that we should stamp each pot we make with a common mark that united the Swedish Edition and eventually with Thor’s expert guidance and knowledge of his Nordic history and his deep love of his ancient ancestry the Skräckjälmen rune was chosen. There was a theme of water waterfall that appears on some of the pots made. On this particular pot, on the rear side is my interpretation of a waterfall cascading out of the pot. The wonderful memories of this amazing trip will be around for as long as I am alive and will continue in these pots long after I am gone from this earth'
Pot 6. Made by Tom Benda - Gul
...'The atmosphere in Thor's studio in Goteborg was full of inspiration from the very beginning. My muse made me remember that I've made a few simple pots from one single piece of clay, but still having everything that a bonsai pot needs - walls, bottom with drainage/and wire holes and feet. This time I just had to aim a bit higher again 😉
"One piece of clay" was a redline bounding most of the pots I made during the wonderful Triskele meeting vol.1 - Sweden'
​
​With feet and drainage holes cleverly integrated into the segmented design, 'Gul' meaning Yellow is finished in a wonderful clean yellow glaze.
CURRENTLY UNDER CONSTRUCTION! .. Almost there!

The pots were sold in 2018 and are currently in the Top Shelf Bonsai Pot collection. advertised and sold......