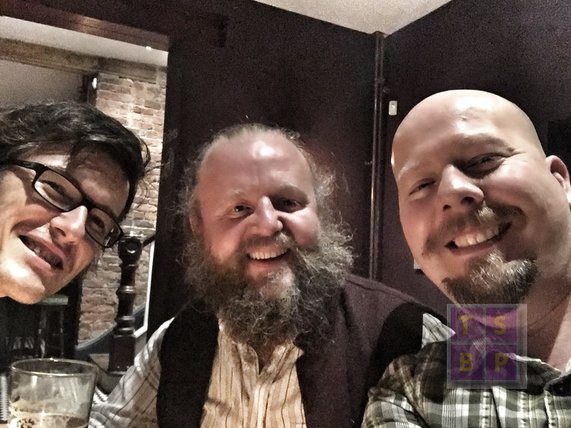 The next stage for the brothers in Clay. New raw unfinished clay pots were swapped at Noelanders Trophy Show 2016 and taken to respective homes to receive their magic -  and totally new one off collaborative pots were produced. The future is good, the future is Triskele!

The results are outstanding.
​Each pot is made by 2 of the 3 potters, and bears the Triskele stamp, in addition to that of both potters.
Pot 1. Made by Andy Pearson, and finished by Tom Benda.
As far as there's no potter's wheel in my studio, I was so stoked by the beauty of the pot's body, that it took me a long period of time until I realised that I can't and don't want to change it. But in the same time another quite strong feeling emerged. I found the courage to use it for double glazing. I've prepared several lines of tile like pattern, reminding me of a beautiful decorated villa in my grandpa's neighbourhood.
Pot 2. Made by Thor Holvila, finished by Andrew Pearson
I changed Thor's feet for cloud feet and gave the pot a wash with metal oxides as I wanted to have the look of an ancient pot that may have been dug from the side of a mountain where the pine trees grow in Scandinavia. The pot has been touched by frost to suggest that it has come from the very cold hard foothills of Valhalla itself
Pot 3. Made by Tom Benda, finished by Thor Holvila.
This finish didn't turn out as expected. The cobalt did not mix up with the white glaze at all, instead they have seamed to separate. I fired it and applied 2 times. The theme is Man on The Moon. I don't know if you can make out the flying schaman? It is brutal in decor, and pretty unique?
Pot 4. Made by Thor Holvila, Finished by Tom Benda
This is quite similar to a bonsai cooperation. I got a pine and I refined its branches, made them come up from the walls a bit. As for the feet, I found a courage to try something new again. I freed myself here, so I didn't know what I'm doing for a while 😀. In the end, there's a pattern reminding me of fishes skeletons with tails, the fertiliser brought by the bears to the roots of the woods. May this help the tree inhabiting this pot one day 😉
The gods of my wood fired kiln smiled on this one. They brought good portion of ashes with the flames. It's difficult to catch the wide palette of colors with words. The grey-greenish and orange ones are my favorite.
Pot 5. Made by Andrew Pearson, finished by Thor Holvila.
My thought with your pot Andrew was just a twirling branch and hoping to get some crystals at a few places. It turn out very cold in tone, but I think it would do great with a flowering tree in pink or orange?
Pot 6. Made by Tom Benda, finished by Andrew Pearson
I was stuck on what to do as the pot was a total blank canvas. So I decided to do something that Tom would never do in his wood kiln. So I adorned it with plum blossoms a green crackle glaze with copper splashes and my trademark cloud feet. 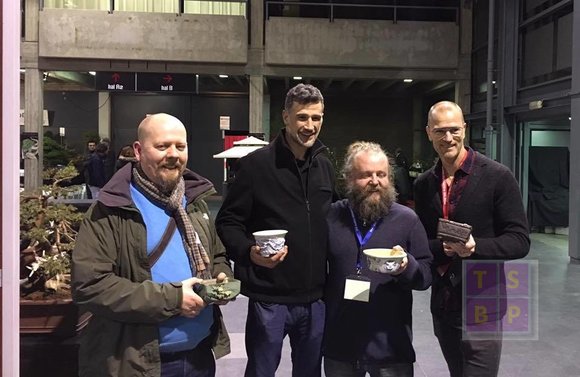 The pots were advertised and Incredibly, and most unexpectedly, Top Shelf Bonsai Pots was fortunate to acquire all of the pots in this first edition. To have all the pots i one collection, I feel is quite special. They will at some point I am sure, be displayed for viewing at a large public show.